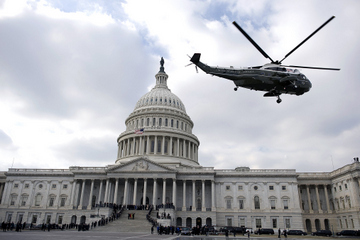 The Sons of AMVETS will once again be storming Capitol Hill on behalf of AMVETS to bring the legislative priorities of our membership to the attention of the House of Representatives and the Senate March 4-5 during the Spring National Executive Committee Meeting.

The Sons’ legislative program began back in 1998 with only three Sons; Larry Combs, Chuck Kyser, and Barry Lima knocking on the doors of representatives to speak to them about veteran benefits. The efforts and results of LZ:DC have grown tremendously over the years. Last year, two buses full of volunteers were transported to the Hill. They had 47 Sons, 6 AMVETS Ladies Auxiliary members, and 14 veterans from all over the nation attend the legislative effort. The Sons also now have a veteran lodging program to sponsor veterans to go with them on the Hill.

Toxic Wounds-Recognition & Treatment
Toxic Wounds Defined:  any adverse health conditions, chronic or terminal, suffered by military personnel resulting from, or associated with, exposure to toxic substances or environmental hazards during their military service, the effects of which may not emerge until months or years after initial exposure.

Since early in WWII, the US Air Force and other Military bases used and disposed of chemical degreasers and other toxic substances that were later determined to contaminate drinking water and pose multiple health risks including: Cancers; Reproductive disorders; Birth defects; and Multiple other serious difficulties, and countless military personnel and their families living and working on or near one or more of these bases may have been exposed to these contaminates, through drinking water, general water usage, exposure through vapor seepage, soil contact, etc. or exposure to toxic smoke from oil field fires or burn pits, and there are currently approximately 140 American military facilities listed on the Environmental Protection Agency’s Superfund list which is the federal government's program to clean up the nation's uncontrolled hazardous waste sites.

The Secretary of Veterans Affairs needs to provide veterans and their families with all available exposure, registry, benefits and health information currently available, and the Department of Veterans Affairs periodically notify eligible individuals of significant developments in the study and treatment of conditions associated with toxic exposures.

Seek congressional oversight through mandatory reporting and hearings to hold DoD-VA accountable for implementing legislative mandates, related policies, programs, and practices and to require the agencies to solicit and communicate with TMC and beneficiaries on these efforts

AMVETS is seeking protected status for all American veterans to give them every advantage in finding gainful employment.  This nearly cost-neutral initiative would enhance veteran access and equity in employment opportunities by making employers more aware of the value of actively hiring veterans and providing legal recourse to veterans experiencing employment discrimination. Employment discrimination is the most important area in which veterans are at a disadvantage when compared to non-veterans.
Some of the prejudicial situations being experienced by veterans seeking employment include:

Despite growing pressure on the Administration and Congress to rein in federal spending, they must ensure that VA health-care and benefits programs receive adequate funding to meet the demands of veterans.

While The Independent Budget veterans service organizations (IBVSOs) understand that the Administration and Congress have voiced opposition to any sequestration cuts that could impact VA in the near term, the future for VA funding remains much less clear. We know that VA, similar to all other federal agencies, is under pressure to constrain spending in the coming years as a result of growing federal debt and annual deficits. However, this philosophy ignores the fact that VA still must meet rising demand for health-care services for veterans of past conflicts as well as those who have served our national interests over the past decade in Iraq and Afghanistan.

The VBA must remain focused on creating a claims-processing system that is carefully designed to decide each claim right the first time.  Congress must support the VBA in finishing the transformation process currently under way, while continuing to hold the VBA accountable through aggressive oversight.  The VBA must continue to work in an open, transparent, and collaborative manner with veterans service organization stakeholders involved in assisting veterans filing claims.  The VBA must commit to implementing a fully digital claims system, which will require that legacy paper files be converted to digital data as quickly as feasible.

The Administration and Congress must ensure that the health-care and benefits programs administered by VA are protected from any efforts to reduce spending as a result of sequestration or other deficit and debt reduction steps.

More than 2,271,222 women are veterans of military service with women today making up more than 14.8%percent of our active forces and 19.5 percent of our reserve component forces.  Women veterans’ service members have been shown to have unique and complex health needs with a higher rate of co-morbid physical and mental health conditions.

The availability and quality of health care for women veterans varies widely across the VA healthcare system causing an inequity in both quality and services.  Less than 30 percent of VA facilities can provide women veterans onsite gender specific healthcare; and most male veterans can receive the full spectrum of primary and preventative care services in one visit, most female veterans must schedule multiple visits to receive the same gender-specific care.

AMVETS urges DoD and VAto enhance their programs to ensure that women veterans receive high-quality, comprehensive primary and mental healthcare services in a safe and sensitive environment at every VA health-care facility, redesign and implement an appropriate health-care delivery model for women veterans and establish an integrated system of healthcare delivery that provides a comprehensive continuum of care, and also ensure that every woman service member and/or veteran gains and keeps access to a qualified primary care physician who can provide gender-specific care for all basic physical and mental healthcare conditions prevalent in women.

AMVETS urges the immediate implementation of the aforesaid in order to provide equal care for our entire nation’s returning female war fighters.